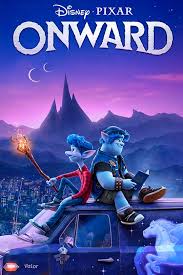 The first thing I’ll say about Onward is that the whole thing feels rushed. PIXAR’s movies over the last several years have been pretty formulaic. As much as that formula has worked, both critically and commercially, it feels like PIXAR has painted themselves into a little bit of a corner, and Onward suffers for it. It felt like the filmmakers were trying to cram every last little bit of planting into the film so that we could get the emotional payoff that we’ve all come to expect from them.

Certainly, no one pulls at the heart strings like PIXAR does, and they were successful again in this film. However, it falls short of recent successes like Coco, because it lacks the subtlety that that film had. This one beats you over the head with exposition, and starts off at 90 MPH with little let up. Everything happens fast, from the dialogue to the action. The actors’ delivery of the dialogue feels like it’s playing at 125% speed, especially Chris Pratt as Barley, Julia Louis-Dreyfus as Laurel and Octavia Spencer as The Manticore. There are a couple of times when the pace slows down, like when Ian writes his lists or when Ian meets his father’s old college friend, but even those scenes do little more than allow us to catch our breath. They don’t let the story breathe, and that’s what’s missing from Onward. It’s fun. It’s entertaining. It tugs at the heartstrings. But it needs to breathe. It needs to allow the audience to soak in what it’s trying to tell us.

A perfect example of when they did was during the climactic scene of the movie. I’m not going to give any spoilers, but suffice it to say that Director Dan Scanlon finally did let the movie breathe in this crucial moment, which is ironic because he gave the movie a ticking clock and the clock is about to run out during the climax. But they let us hang. They gave us an extremely emotional beat and they let us experience it for as long as we could, and it worked brilliantly. The last 20 minutes saved this movie, and that’s not the first time I’ve ever said that about a PIXAR film.

The problem was the getting to those last 20 minutes. Another issue that the vast majority of PIXAR films have had over the last decade and a half is that they tend to be road movies. The hero goes on a physical journey, and many of these journeys have been episodic with no real flow to the narrative. They did avoid that trap in this film, although barely. The film is still episodic, but at least there’s a flow to the story. For example, I always felt the problem with Finding Nemo was that you could have taken all of the individual adventures that Marlin and Dory had in that film and changed the order of them and it wouldn’t have changed anything about the order. One adventure didn’t lead organically into the other. In Onward they didn’t have that issue in such a pronounced way. Ian and Barley do have a series of individual adventures, but the filmmakers did a better job in this film of making sure that one adventure led into the next one. The reason for that is that the film as a clear, even if somewhat weak, Hero’s Journey. Warning! Spoilers ahead! 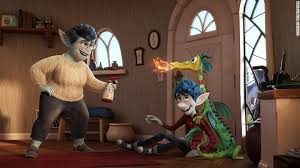 In a prologue, we learn that this is a world in which magic used to exist, but it was replaced by technology, and now all magic has been forgotten. We meet the Lightfoot family, including Ian (Tom Holland) and his brother Barley (Chris Pratt) and their mother Laurel (Julia Louis-Dreyfus). We learn that Ian is timid and has few friends and that Barley is holding on to his belief in magic and a desire to live in those olden days. We also learn that their father died before Ian was born and Barley only as three memories of him.

Laurel shows them the wizard staff that their father left for them, along with a Phoenix Gem and the words to a spell that could bring him back to life for one day. Barley can’t get the spell to work but Ian can. Unfortunately, Barley messes it up half way through and their Dad only comes back from the waist down. With the Phoenix Stone disintegrated, Barley wants to go on a quest to find another one before their Dad disappears forever in 24 hours with the next day’s sunset.

Refusal of the Call

A very short and very weak refusal by Ian lasts only a couple of lines, but he’s soon as excited about the quest as his brother.

The load up in Barley’s van, Guinevere, and are off on their quest.

Ian tries to learn to do magic, but fails at first. They arrive at the Maniticore’s Tavern in order to find the map to the Phoenix Gem. Expecting a magical tavern filled with hoards of rough adventurers longing for their next adventure, they find at a Chuck E. Cheese. They enrage the Manticore and she sets the tavern on fire, burning the map, but giving Ian an opportunity to use the magic he couldn’t before. Even though they don’t have the map, they find a children’s menu that has a clue to find the gem at Raven’s Point. Barley wants to take the Path of Peril, but Ian convinces him to take the Expressway. After running out of gas, they piss off some pixie bikers, but Ian has to drive to get them away. The final test shows Barley finding out that Ian thinks he’s a screw up when they have a run in with a couple of police officers, and he refuses to talk to him. Then they have a dance party with their Dad before deciding to go the way that Barley wanted to go originally.

On the Path or Peril, they come to a bottomless pit that they need to use magic to get across it. But here is where Ian starts to gain confidence that he can do this. It’s an archetypal moment that borrows heavily from Indiana Jones and the Last Crusade (believing in the bridge) and Dumbo (Barley’s rope substituting for the magic feather). They get across the chasm and see a Raven statue pointing to clues.

Colt Bronco sows up to stop them from going any father. A chase ensues, with Ian driving, A character shift has happened with him now. But they find themselves trapped, and when Ian is unable to do the necessary magic, Barley has to sacrifice Guinevere in order for them to be able to continue. All she leaves behind is a tail light that looks a lot like a Phoenix Stone.

They keep following Ravens until they get to a river that flows through a cave. Ian uses magic to turn a cheese puff into a raft that they take down the river. Ian starts to show some real skill with the magic and the brothers have a bonding moment. Barley reveals another memory of being too scared of their Dad when he was sick and hooked up to all of the tubes and he didn’t look like himself, so he wasn’t able to say good bye to him. That’s when he decided to never be scared again. 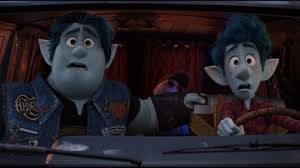 They get to another tunnel and need to avoid a series of Booby traps (more Indians Jones). They finally escape, but the escape leads them out a manhole cover that brings them back to their home town right outside the high school.

It looks like they won’t get to fully resurrect their Dad, and Ian thinks that Barley screwed it up his one chance to meet his father. He leaves Barley with the staff and walks away with Dad’s legs. He then goes through the list of all of the things that he wanted to do with his Dad and realizes that he already did all of those things with Barley, and Barley has been the only father to him that he’s really needed. But then, Barley finds the gem in an ancient fountain in town and they’re able to restart the spell. However, it unleashes a curse in the form of a Dragon. While Ian uses magic to defeat the curse, Barley is able to meet their father. Ian watches from a distance as Barley is able to get the closure that he never had before. Their father then disappears. Barley tells Ian that their Dad is proud of the person Ian grew up to be and Ian gives Barley the credit. Barley then gives a hug from their Dad. 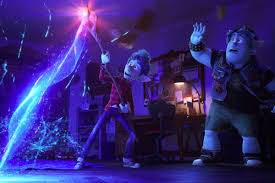 Return With the Elixir

Magic is back in the world. Ian teaches people that with a little bit of magic, we can accomplish anything. He has friends now, and Barley has Guinevere the Second, and the brothers take it on another quest.

Overall, Onward has a decent structure and it pushes all of the emotional buttons that PIXAR is generally successful in pushing. However, the story isn’t told with the usual polish of the best PIXAR films. While it isn’t as bad as The Good Dinosaur or Cars 3, it’s nowhere near as good as Coco or The Indredibles or Toy Story 2. It’s definitely somewhere in between. If you’re a fan of PIXAR, you’re sure to be a fan of this film. If you’re not, you’ll probably be left wanting.