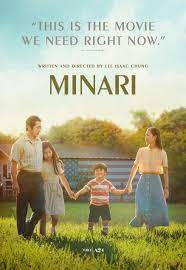 After watching Best Picture nominee Minari, I came away feeling like it was almost a great movie. It is a character-driven movie that relies on the challenges facing the various relationships to build drama. A couple of these relationships effectively hit the mark, but this is a movie that fell into the trap of writer/director Lee Isaak Chung putting characters into difficult situations and then easily and quickly extricating them from those situations. This severely hampered the amount of drama that he was able to build. In fact, almost from the moment the films started, we, as the audience, were being set up for a very dramatic story that was never manifested.

This is a story of a family of Korean immigrants who leave the stifling dead-end jobs of California in search of a better life farming their own land in Arkansas in the 1980’s. The family’s patriarch, Jacob (Steven Yeun) dreams of becoming a successful farmer growing Korean vegetables in the rich Arkansas soil. His wife, Monica (Yeri Han) is less than optimistic that this venture will work and is not happy with their new living conditions. Their young son David (Alan Kim) has a heart condition that prevents him from being able to run or exert himself in any way, and could kill him at any moment. Their daughter Anne (Noel Kate Cho) is at that awkward age of becoming a teenager and wants to be near friends.

They struggle at first with their new living arrangements, and have to work at a chicken sorting plant to make ends meat. But with no one to watch the kids, Monica’s mother, Soonja (Yuh-Jung Youn) moves in with them. She’s not your typical grandmother. She doesn’t cook and she likes to gamble at cards. She sleeps on the floor of David’s room, and their relationship is an awkward one at the start. However, David’s mischievous ways soon endear him to his grandmother, and their relationship grows in a heartwarming way. Soonja has a mischievous streak of her own and she leads the children into the woods one day, even though the kids aren’t allowed to be in there. There, she finds a creek that she declares is the perfect place to grow minari, which can be used as food, medicine and many other things.

I can’t say enough how impressive Chung was in building the relationship between David and Soonja. It starts off with both being antagonistic towards the other. But as they realize they have more in common with each other, their differences are slowly melted away and they form a bond that would have been unthinkable when Soonja was introduced. What’s more, Chung did this in an organic way that didn’t feel forced. There were moments of levity at every stage of the relationship’s development that brought humor to the story. That did two things. It made the characters likable and it allowed us to root for their relationship to grow and flourish.

On the flip side of that coin is the relationship between Jacob and Monica. They love each other as husband and wife, but the combined stress of being immigrants in the United States, having a son with potentially deadly heart condition, and the financial problems their experiencing are staining their relationship perhaps to a point beyond repair. Monica wants to move back to California. Even though they weren’t making much money, at least it was steady and they could live near a hospital. Jacob, however, is also feeling the strain of being an inadequate husband, father and provider for his family. He stubbornly wants to hold on to the farm and goes so far as to choose it over saving his family.

The dynamic between those two relationships should have been have been enough to craft a dramatic story around. Combine that with the fact that their an Asian immigrant family living in Arkansas in the 1980’s and this should be a very dramatic story filled with tension, potential heartbreak and ultimate redemption. Unfortunately, none of that happened because as good as Chung was at building relationships, he was lacking in following through on dramatic situations. It was as though he didn’t want to see his characters suffer too much. I have heard that this is an autobiographical story. That makes sense, because it’s easy to tell that he was too close to the characters. He would put them in potentially dramatic situations but diffuse any chance of any real conflict or drama happening almost as soon as they started.

That’s why this was almost a great movie. There were times where Chung took the story right to the edge of being very dramatic. He had given himself all of the ingredients for a dramatic situation. It would take just one more step to create that conflict and drama and then he pulled back before crossing the event horizon. He did this time and again throughout the film. 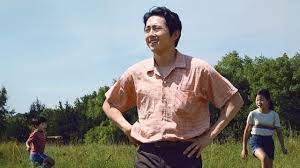 Looking at the racial component alone, there are several missed opportunities. This is an Asian family living in Arkansas in the 1980’s and if we’re being honest, they should have experienced significant racism, but they experienced practically none. The only time they get close to experiencing it is in a scene where they go to church and a little white boy asks David why his face is so flat. David says it isn’t and the boy shrugs it off and invites him to his house for a sleep over. Meanwhile Anne meets a little white girl who thinks she’s speaking an Asian language, but is only speaking gibberish. These microaggressions are borne out of ignorance and curiosity. There’s no malice there. Then in a later scene, David is having a sleep over at the boy’s house, and his father is there. The father is full-on redneck, and it’s totally reasonable to think that he’d get angry at the thought of an Asian boy sleeping in his house and eating his food. Nope. He’s totally cool to David and tells him to make sure he helps his daddy.

There’s another scene where Jacob is at a bank applying for a loan. The very nice white banker tells him he can have all he needs and not to be afraid to come back if he needs more. 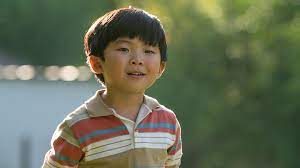 And I don’t know about you, but if it’s made clear at the beginning of a movie that a cute and likable little boy has a heart defect, then it’s reasonable to expect that something really bad is going to happen to that boy. Think Thomas J from My Girl. We learn early in that film that he’s allergic to bee stings. What happens later in the movie? He walks through a beehive and gets stung so much that he dies. I kept waiting for David’s heart condition to become a source of drama. There were some false starts where it looked like it would, but it was ultimately nothing more than a MacGuffin in a movie filled with MacGuffins.

This is important because the lifeblood of any dramatic story is the obstacle. As a writer or director, you need to put obstacles in front of your main characters that they must overcome in order for the story to move forward. Too many times in this movie are the characters confronted with obstacles that just kind of go away or end up not being obstacles at all.

Minari is a feel-good movie that doesn’t follow through on its dramatic moments and situations. I find it a bit head scratching that it was nominated for Best Picture because it’s ultimately a frustrating movie that doesn’t fully deliver on its promise.