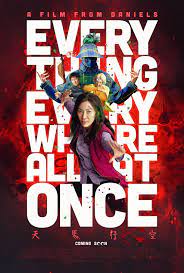 Everything Everywhere All at Once is a stylized film that combines a whole lot of familiar ideas to create a film that is utterly unique. While watching this film, I felt like I was seeing something the likes of which I had never seen before. Later as I reflected on it, I realized that it was a film that was heavily influenced in terms of storytelling and style by other films. However, the screenwriting and directing team of Dan Kwan and Daniel Scheinert combined these elements to create a movie-going experience that was as unique as it was entertaining.

Stylistically, I came out of this film feeling like I had seen a latter-day Scott Pilgrim Vs. the World. Everything Everywhere All at Once wasn’t as silly as Scott Pilgrim, although there were plenty of comedic moments, and the stylization was completely different in both films, but the overall effect is the same. The in-camera effects and the graphics on screen created a stylized world that keeps viewers on their toes, not knowing what kind of visual stimulation is coming next. However, none of these stylized components existed for their own sake. Kwan and Scheinert expertly used them to create mood and advance the story. They also sped up the camera during fight scenes to add a frenetic feeling to what were already very intense and interesting and entertaining scenes. 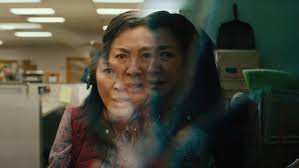 From a storytelling perspective, there were a couple of films that Everything Everywhere All at Once borrowed from in significant ways. This film borrows a lot, both story-wise and thematically, from The Wizard of Oz. That is one of the most well-known films in the history of cinema, and its story and thematic components are obvious. Everything Everywhere All at Once has similar themes, but this time it is the mother who is dissatisfied with her life in her ordinary world and is brought into the special world where she sees all of the different lives she could have experienced and they all look much better than the life she has. However, just like Dorothy, over time this movie’s hero, Evelyn Wang (Michelle Yeoh) realizes that the life and the home she has are perfect for her and she wouldn’t give that up for anything. Also, similarly to The Wizard of Oz, the people who are in her ordinary world act as archetypal shapeshifters and appear in her special worlds in different and strange ways. Also, also, there is even a Wicked Witch in Everything Everywhere All at Once, and they even give us a little end-around with it. We start the movie thinking that IRS agent Deirdre Beaubeirdra (Jamie Lee Curtis) is playing the role of this movie’s Mrs. Gulch, but instead, it’s Evelyn’s own daughter Joy (Stephanie Hsu) who commands the power to destroy everything in Evelyn’s world. 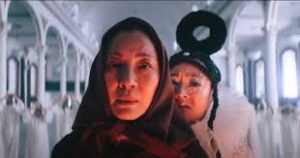 The new take on this classic theme of appreciating what you have, no matter how miserable it seems, has a ton of depth to it as well. This is a story about the fragile relationship between mothers and daughters and how the morality of one generation is different from the next. Any aspiring screenwriter should study this film’s script for that reason alone. That thematic aspect added a wallop of emotional impact to this story. The audience spends the first three-quarters of the film enjoying the action and the witty dialogue, but all of that action was subtly laying the groundwork for a surprisingly emotional finish. It is that emotional finish that separates this film from others. We actually care about these characters. We care about what happens to them and we genuinely root for them. 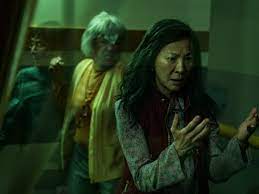 It seems like Marvel has been dominating the ideas behind the multiverse lately, but the other film that I believe influenced this one is not a Marvel movie. It’s a more minor comedy from the late 80’s called Mr. Destiny, that starred Jim Belushi and Michael Caine. That film ran with the idea of the multiverse without referring to it by that name. But it pointed out how decisions and actions can change the course of our lives depending on their outcome. In Mr. Destiny, it was one specific event from his childhood that led Jim Belushi’s character’s life to go in what he felt was the wrong direction. Mr. Destiny, played by Michael Caine, changed that event for him to let him see how his life would have turned out had that event worked out differently. Again, the thematic issues of appreciating what you have are all over that film, and I couldn’t stop thinking about it while watching Everything Everywhere All at Once.

Finally, I would be remiss if I did not point out how successfully this film and specifically its script implemented the Hero’s Journey. I will save a full Hero’s Journey breakdown for another blog, but suffice it to say, this film is so successful as a story, and is striking such a chord with audiences, precisely because Dan Kwan and Daniel Scheinert in their magnificent screenplay used those components to craft this story. Not only are all the stages there, but there are several other archetypal elements throughout the film, ranging from the characters to the story elements. Throughout the film we are shown threshold guardians and mentors, tricksters and shapeshifters, shadows and allies. Evelyn herself is not only the hero of the story, but she is also a shapeshifter as she uses abilities from her different existences to change who she is all through the story.

All of that keeps us guessing about what will happen next. It keeps us engaged fully in the story. This is a film that I can highly recommend based on the sheer entertainment value. But it also has a screenplay that any aspiring screenwriter can learn from.