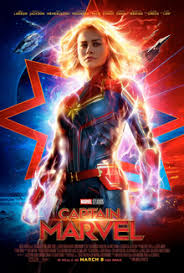 Few movies in the Marvel canon have been as anticipated as Captain Marvel, and few Marvel movies have been as divisive upon release. Marvel films are generally popcorn movies with little in the way of overt social commentary, which is usually just fine. Their sole purpose it to entertain you, and most of the time that’s all they should be expected to do. However, this was the first film in the Marvel universe with a female protagonist and it seems like everyone has an opinion on how that’s affecting the general public’s attitudes towards the film. I’m not particularly concerned about all that noise, and I’m just going to tell you my attitude towards the film.

I want to begin with the caveat that, while I generally like Marvel films, I’m not a giant fan of them. There area couple that for me have earned A-grades (The Avengers: Infinity War, Iron Man), and a couple that have earned very low grades (The Avengers: Age of Ultron, Iron Man 2). But the vast majority of Marvel films fall somewhere in the B-minus to B-plus range. They’re entertaining. They’re beautiful visually and generally have outstanding production design. They are quite often humorous. But they tend to be wide and shallow money grabs, which is what they have to be in order to appeal to the massive audiences that they attract.

In his online Master Class, Aaron Sorkin makes an interesting analogy. He mentions how the least offensive, most popular form of beef is the McDonald’s hamburger. We can debate the merits of that statement on its own, but his point was that McDonald’s sells a lot of hamburgers. They’ve cast a wide net and more people eat McDonald’s hamburgers in a day than almost anyone else combined sells in a year.

Marvel is essentially the McDonald’s of cinema.

And I say that more as an observation than as a critique. It is not a good or a bad thing. It is what it is. Just like at a McDonald’s, there’s something for everyone in a Marvel film. You’re going to like it. It will fill you up. You may even leave satisfied. But it’s not going to offer you anything that’s particularly memorable or profound, and almost all of them are the same. 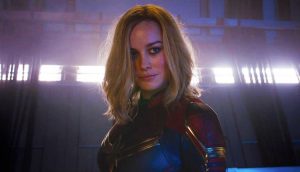 Which brings us to the latest offering from Marvel, Captain Marvel. With all of the noise I’d been hearing about this film, I was expecting to see a movie that tackled gender inequality head on. I expected to see a movie that took a serious and critical look at preconceived notions in our society of gender roles. I expected to see a film that kicked off the bounds of cinematic gender stereotypes and moved forward into a brave new world of equality. While the film scratched the surface of those issues, it did little to take a critical look at them beyond much more than a cursory glance.

Captain Marvel was little more than a typical Marvel film.

Not that there’s anything wrong with that. Sometimes I love a Quarter Pounder with Cheese, and nobody does better fries. Wash it all down with an ice cold Coke and you’ve got a true American classic. And that’s what we got with Captain Marvel. We got fast paced action scenes, beautiful art direction, a cool 90’s-era soundtrack, and just enough character introspection and pathos to keep us engaged. They tried to ride the wave of the hero trying to remember her past, a-la the Bourne series, but it never reached the level of engagement where I truly cared about who Carol Danvers (Larson) was or where she came from. 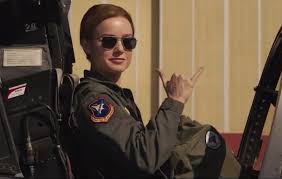 This is the key element to my critique. This movie is well on it’s way to making a bazillion dollars, so obviously a giant grain of salt needs to be taken with this. Again, Marvel is selling Big Macs, not prime rib. But Marvel has also given us characters like T’Challa from Black Panther who are deep characters with internal conflict who have to decide to look back or to move forward. T’Challa was especially effective because he spends most of the story holding his late father in high esteem before discovering that his father was a flawed person who made critical errors in judgement, leaving T’Challa to have to reconcile this before he could move forward. 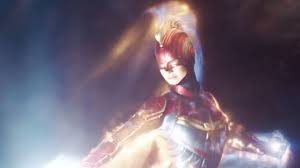 Anyone can get up after they’ve fallen. Granted, not everyone does, but there’s nothing extraordinary about it. Getting up after you’ve been pushed down is a much greater accomplishment. Getting up, even as someone who is seemingly stronger than you is holding you down, is a greater accomplishment still. That’s how you get an audience to care about your character. That’s how you get her to be universally liked and appreciated. That is where my main frustration comes from this film. I didn’t care. The climax of this film should have been filled with emotion and it wasn’t. A movie like this should have allowed us to feel something, and it didn’t, so I left less satisfied than I cold have been. It seems as though Marvel was hoping that simply the novelty of a female superhero would be enough to make us care, and judging by the box office results, it was for most people. Perhaps it was the soft sexism of low expectations, because I think this film could have and should have done better.

I thought we were going to see a film that would inspire.

I said earlier that this was a typical Marvel film. What makes that statement so is that Captain Marvel, like many other Marvel films, is all flash and little substance. It wouldn’t have taken much to show Carol actually overcoming the people in her past who told her she couldn’t. Simply getting back up is not enough. We needed to see that she didn’t need superpowers to win the day. She (and girls and women everywhere) always had the power within them to overcome forces that have held them back. We’ve seen it throughout history, and we’re seeing it to this very day. Instead, Marvel stuck to their formula and gave us another Quarter Pounder with Cheese when they could (should?) have given us something a little more gourmet.

But let me say again. This is an entertaining movie, and if that’s what you’re looking for, then you should see it. If you haven’t seen it yet, however judging by the box office numbers, you probably have, then go in to it with the idea that you’re going to see a popcorn movie and not a social statement. Most of the time I’d be ok with that. Not every movie needs to do that. However, the opportunity was there for Captain Marvel to make that statement through its storytelling in a way that could have used subtext and would have been thoughtful. They could have at least given us an Umami Burger, but they stuck with what has worked for them, and it is continuing to work for them. However, eventually it is going to get stale. Hopefully they’ll get to a point where they’ll be comfortable taking more chances.