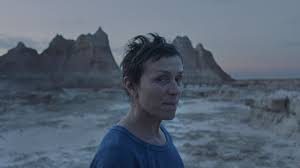 In what should have been a surprise to no one, and could largely be viewed as a coronation, Nomadland walked away with the night’s top honor, along with Oscars for Best Director (Chloé Zhau) and Best Actress in a Leading Role (Frances McDormand). Nomadland is a powerful film about self-discovery, overcoming grief and finding the courage to live outside of what society might consider to be the “norm” so you can find the peace to move on with your life.

For all of that, NomadLand should be lauded. Emotion and character drive this film more than plot. “See you down the road” is not only one of the most important lines of dialogue in the film, it’s also one of the driving thematic principles. Speaking of dialogue, there isn’t a ton of it in the film, and much of the dialogue felt improvised on the spot. It was shot like a docu-drama. If you didn’t know any better, you might have thought you were watching a compelling documentary about people living off the grid.

Also, this film was beautiful. I’m mildly surprised that it didn’t win for Best Cinematography as well, because the cinematography might have been the strongest component of the film. Not only did Zhau and Director of Photography Joshua James Richards capture the spectacular scope and vistas of the American west, they expertly used light and shadow to convey the mood and the state of mind of the characters. Richards also was keenly aware of when to show the depth of the space the characters were in when that was necessary, and when to flatten that space out to show just how small the space they were occupying could be. 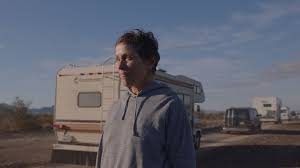 I’m not going to get into a full plot summary for this film, because, as I mentioned, plot isn’t what drives this film. Watching Nomadland is like looking at a painting in a museum. To just glance at it, or to look superficially at its surface is to miss the overall point. Often times a painting isn’t just the capturing of a moment in time. There is a story within that painting and the painting needs to be closely examined over a period of time for the story to be made clear. Effort is required on the part of the viewer to discern the painting’s story and/or meaning. The pacing of Nomadland is slow and deliberate. At first glance, it feels like not a lot is going on, but that’s not entirely true.

Not a lot is happening, but there is a lot going on.

The film starts out with some chiron about the death of the city of Empire, Nevada in 2011 due to the closing of a plant that was the city’s main employer for 88 years. We then see Fern (McDormand) cleaning out some personal items from a storage unit. She’s emotionally connected to some old men’s clothes and she carefully takes care of some old dishes before putting them in her van. We discover that she’s living out of that van, parking it in a camping site and working at the local Amazon packing plant for the holidays. But once the holiday season is over, she can no longer stay at the camp site and she needs to move on.

Through a friend she finds out about Bob Wells’ cheap RV living and that a group of people will be gathering in a sort of commune down in Arizona. She makes her way down there and learns the ways of the nomad. But she has found her tribe, if you will, including a kindly and helpful older gentleman named Dave (David Strathairn). She learns basic tricks for survival on the road, but she is still struggling to let go of the past, as evidenced by her angry reaction when Dave accidentlally breaks her dishes.

Over the course of the next hour and a half, Fern slowly learns to see the world around her in a way that she hadn’t before. From smaller details, like having a bucket to defecate in to more important things like making sure that her van has a spare tire, Fern starts to master the ways of the nomad. She’s even making human connections, whether it’s with Dave or her friend Swankie who’s slowly dying of cancer, but still has enough light in her eyes to clearly see the beauty in the world that surrounds us.

Fern does run into trouble when her van breaks down and it’s going to cost $2300 to fix. She doesn’t have the money and needs to borrow it from her sister, Dolly. She has to travel to Dolly’s home and spend some time there in order to get the money. There is a little bit of tension between Fern and Dolly and her husband George, especially when Dolly offers to let Fern stay with them, but Fern tells her she can’t stay there. Dolly hands Fern the cash and admits that she’s not as interesting as what’s “out there”. Dolly tells Fern that she admires her because she was always braver and more honest than everybody else.  There is finally a moment of understanding between the two of them.

With her van back in commission, she then meets up with Dave again. Dave has left the nomad life behind and moved in with his son, who is starting a family of his own. Dave feels guilty because he was never there for his son and he felt like he wasn’t a good father. Fern advised him to be a good grandfather and he’s taking that advice. He asked Fern to come with him, and she finally takes him up on it to meet him there. She stays for a few days. The family likes her and there is a clear bond between Fern and Dave. But the call of the road is too strong, and she steals away one night without saying goodbye.

She meets back up with Bob Wells and his group. Swankie has passed away. She loved rocks so they all toss some rocks into a fire as an act of remembrance. As Bob throws his rock in the fire, he says, “See you down the road, Swankie.” Later on, Fern is talking to Bob and she tells him that after her husband died, she felt that if she left town, there would be no memory of him and it would be like he never existed. That’s why she stayed there even after the town was dead. She feels like now she spent too much of her time just remembering him. Bob then talks of his son who committed suicide a few years earlier. Bob has had a hard time with it, but realizes that he can honor his son by helping other people. He then talks to his about the philosophy of “see you down the road.” The lifestyle of a nomad is one of constant motion. You see people for a time and then move on. But somehow you always run into them again. It could be months, it could he years, but you always see them “down the road.” There is no final goodbye. That philosophy leads him to be certain that he’ll see his son again and she’ll see her husband again. 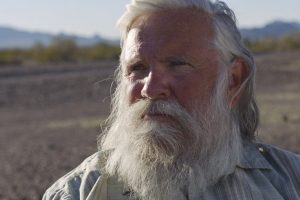 Fern then goes back to Empire. She empties out her storage unit and gives all her stuff away, saying she won’t miss one thing. She goes to her old house and looks at the view. She can finally move on.

We call carry baggage with us. That baggage can weigh us down and force us to revel in the past rather than living in the present and thinking about the future. Nomadland is telling us that there is a great big wide world out there. We need to break off the shackles of our past and step however we can into the future.

I’m inclined to say no. Yes, this was a powerful story thematically. It was told in a nontraditional way and the filmmakers took a risk in doing that. Nomadland is a movie that requires reflection. While I was watching it, I couldn’t wait for it to end. But after thinking about it, I have a much greater appreciation for it and a much deeper understanding of what they were trying to accomplish. I can also say that they did accomplish it. However, my favorite movie of the year was The Sound of Metal. I thought it was nearly as strong thematically and it was a more entertaining film to watch. If Nomadland was like eating your vegetables, The Sound of Metal was like adding a steak to it. I also preferred Judas and the Black Messiah, The Trial of the Chicago 7, Promising Young Woman, Minari, and The Father to Nomadland. There are various reasons for that. All of those films were more entertaining and most of them allowed a deeper emotional connection to the characters and what they were going through. I was not a huge fan of Mank, as I felt the story was too scattered. All that said, I understand why Nomadland won. It probably deserved to win. It just wasn’t my favorite movie of the year.

Yes, you should. If you are an aspiring screenwriter, or just a fan of good filmmaking, this is a movie that you should be familiar with. It tells a compelling story without a dynamic plot, without CGI effects and without crazy action sequences, or even any action at all. It’s an internal story with internal conflict, and it is a great film.