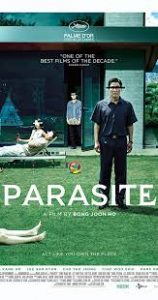 A desperate poor family cons its way into working various servant jobs for a well-to-do family before one of the servants they got fired threatens to expose them.

Oscar history was made the night of February 9, 2020 when Parasite became the first non-English language film to win Best Picture. The South Korean film also won Best Foreign Language film, and Director/Screenwriter Bong Joon Ho took home Oscar statues for Best Director and Best Original Screenplay. In stark contrast to the previous year, everyone seemed to be happy about how the night played out.

Parasite is more than a film about class warfare.

Bong Joon Ho did a marvelous job of constructing a story that exposes the struggles we have with income inequality without passing judgment on members of either side of the issue. In fact, the characters of different classes interact and converse with each other in charming and compassionate ways. Much of the depth of the story comes from the fact that the Have-Nots (the Kim family) spend most of the second act serving not only as servants, but as mentors to the well-to-do family (the Parks). The first half of the film is spent building these relationships and convincing the audience that even though these two different families live under vastly different circumstances, they share many of the same hopes and dreams, and they respect each other as human beings. 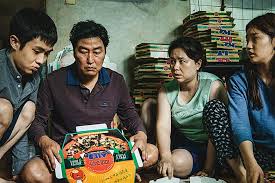 Then in the second half of the film, we watch the relationships deteriorate. The deterioration is slow at first, but then excels in an extreme way. What makes it effective is that neither side thinks they’re doing anything wrong, necessarily. For example, there is a scene near the start of the second half where Mr. Park (Dong-ik) and Mrs. Park (Yeon-kyo) think they’re having a private conversation, but due to circumstances of a prior scene, Kim Ki-taek and his teenage son, Ki-woo and teenage daughter Ki-jung are hiding in the same room. Dong and Yeon discuss the interesting smell of Ki-taek, who has been hired as their chauffeur, and Dong mentions that the smell permeates the car. It smells like old radishes and the subway. Yeon says she hasn’t noticed and it’s been years since she rode on the subway. The point is that they’re no judgment in what they’re saying, it’s simply a matter of fact. Meanwhile, in his hiding place under the table humiliated, Ki-taek attempts to smell his clothes to see if he notices.

That type of sub textual and visual storytelling certainly went a long way towards Bong Joon Ho winning the Oscars for Best Screenplay and Best Director. 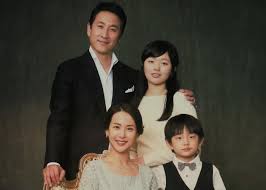 The characters in Parasite were not caricatured. They were deep characters, neither all good nor all bad. The upper class characters had issues and pathos that any person could relate to. The lower class characters, hardly working class heroes, had flaws that helped to put them in the difficult situations they were in. Far from blaming Dong-ik Park for his own issues, or even feeling jealous of him for the differences in their societal standing, Kim Ki-taek actually admires Park for his success and for the way he takes care of his family. At the same time, the Parks don’t openly look down on the Kim’s as somehow beneath them. Yes, they work for them as servants, but until the climax of the movie, their interactions are largely as equals.

This is a movie about two families that live in different worlds, but are clearly occupying the same space.

The fact that Parasite follows such a structured Hero’s Journey is what made a South Korean Film resonate with American audiences, as the Hero’s Journey crosses cultural divides and is universal in its appeal. It’s a story structure to which anyone in the world can relate, and Bong Hoon Jo nailed it to near perfection. 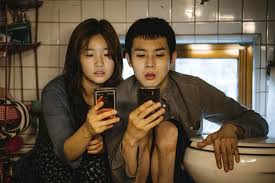 The film begins with us meeting the Kim family in their Ordinary World. They live in a small, subterranean apartment that is frequented by bums pissing outside their window. They regularly get disconnected from their cell phones and Wi-Fi, and have to work odd jobs like folding pizza boxes in order to get reconnected. The teenage son of the family, Ki-woo receives the Call to Adventure when his friend Min asks him to take over his English tutoring duties for the Parks, a wealthy family who have a teenage daughter he’s currently in love with. He wants to go to college and make his own money so he can ask her to marry him when she’s old enough. Ki-woo initially Refuses the Call by telling Min that he’s not qualified because he’s not going to college and he should ask one of his college friends to do it. In what turns out to be the act of ultimate irony, Min tells Ki-woo that he can only trust him to not look at the Parks’ daughter as a sexual object, so Ki-woo accepts. This scene also serves as the Meeting of the Mentor stage of the journey with Min serving as the Mentor archetype. The Mentor often gives advice and tools for the hero to follow and use, and Min does that for Ki-woo by offering the job and presenting him with a gift from his uncle of a lucky stone that they believe will bring prosperity to the house. Like Gandalf pushing Bilbo out the door, and Obi Wan giving Luke his lightsaber, Min opens the door for Ki-woo, and ultimately his family, to infiltrate the home of the Parks. 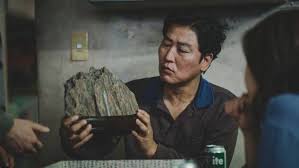 Ki-woo Crosses the First Threshold when he arrives at the Parks home and accepts the job to be the tutor to their daughter Da-hye. The Tests, Allies and Enemies stage of the journey shows the slow infiltration of the Park home by the Kims, and Ki-woo falls in love with Da-hye and develops the same desires for her that Min had. First, Ki-woo gets his sister, Ki-jung hired as an art teacher for the Parks’ son, Da-song. Then his father, Ki-taek is hired as the chauffeur after Ki-woo and Ki-jung plant a pair of girl’s underwear in the car, framing the chauffeur for having sex in it. Finally, they find out that Moon-gwang, the housekeeper, who had been working in the house since the previous owner and architect lived there, is allergic to peaches. They secretly expose her to them, causing her to go into coughing fits, and allowing Ki-taek to manipulate a rag so it looks like she coughed up blood. With her gone, Ki-taek gives a professional looking business card that had been designed by Ki-jung to Mr. Park that’s for a fake staffing company for high-class clients. Mrs. Park calls and, sure enough, Ki-woo’s mother, Chung-sook is hired as the new housekeeper. All the while, Ki-jung, Ki-taek and Chung-sook all go under pseudonyms to keep the ruse realistic.

The Approach happens with the Parks leaving for a camping trip during a rain storm, and the Kims taking the opportunity to stay at their house and drink the Parks’ booze. Everything seems to be going great until Moon-gwang rings the bell. She gets inside, saying she left something in the basement. Chung-sook follows her and sees Moon-gwang struggling to open a secret passage that even the Parks don’t know about. It leads to a secret bunker that the home’s original owner had installed in case the North Koreans attacked.  Hidden in the bunker is Moon-gwang’s husband, Geun-se. He’s been down there for four years, avoiding debt collectors and loan sharks, and Moon-gwang has secretly been bringing him food. Chung-sook is about to call the police to turn them in when the rest of the Kims, who had been listening out of site, fall into the bunker. They refer to each other by their real names and Moon-gwang captures all of it on video on her phone, and threatens to expose them. The Supreme Ordeal follows as Moon-gwang and Geun-se take advantage of their new found power. That is until the Parks call and tell Chung-sook that the camping trip was cancelled due to rain and they’ll be home in eight minutes. A huge fight ensues with Ki-taek tying up Geun-se back in the bunker and Chung-sook pushing Moon-gwang down the steps of the passage, causing her to crack her skull.  The Reward shows the family escaping the house, but not before hearing what the Parks really think of them. They return to their home to find it flooded. Ki-woo grabs the stone and they spend the night in a local shelter. 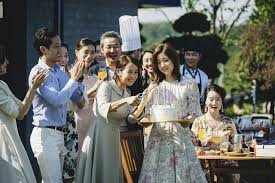 The Resurrection stage brings the Kims back to the Parks’ house for the son’s birthday party, and all of the Parks’ high society friends are there. After making out with Da-hye, Ki-woo goes down to the shelter to check on Moon-gwang and Geun-se. Moon-gwang has succumbed to her head injury and Geun-se attacks Ki-woo, eventually bludgeoning him with the stone. Now totally insane, he goes up to the party and attacks the Kims, stabbing Ki-jung with a kitchen knife and fighting with Chung-sook, who eventually stabs him with a skewer. Park’s reaction to how Geun-se smells is too much for Ki-taek, and he stabs Park in the chest before disappearing.

The Return with the Elixir shows Ki-woo surviving his attack, although Ki-jung wasn’t as lucky. After recovering Ki-woo goes to the Parks’ house. Another family lives there now, but he sees the outside light flickering in a pattern. We had seen earlier that Geun-se had access to switches that turned exterior lights on and off and he knew Morse code. Ki-woo sees a similar pattern and deciphers the message is from his father who hid in the bunker after killing Park. He’s surviving and hopes that Ki-woo and his mother are well. Ki-woo writes a letter to his father telling him that he’s going to work hard and make a lot of money so that one day he can buy that house and they’ll all be reunited.

That clear hero’s journey, along with universal themes of family and class envy, helped to make this South Korean film the darling of the American Academy Awards. it doesn’t matter who is telling the story or ultimately what the story is about. As long as the structure is in the story, anyone will be able to relate to it and enjoy it.

I don’t think they got it wrong. Parasite was not my personal favorite movie of the year, but the reasons I explained above certainly show that it deserved to win. It also wouldn’t shock me if this was a course correction for Green Book winning the previous year and all of the backlash that created. Was Parasite a worthy winner? Yes, it was. Was it the film I would have voted for? No it was not. I would have voted for Joker, Jojo Rabbit and 1917 ahead of it. For me, those films were more compelling, more dramatic and more entertaining. I would have voted for Parasite ahead of Little Women, Once Upon a Time in Hollywood and A Marriage Story, as I didn’t feel those films were on the same level, although I did feel the acting in A Marriage Story was sublime. Parasite certainly did everything it needed to do. It just wasn’t my personal favorite film of the year.

Yes, you should. This is a remarkable film that is well made with an exquisite story that is well-told. If you are an aspiring filmmaker, then this is a film that you can study for the choices made in the direction, the cinematography and the art direction. If you are an aspiring screenwriter, then this is a film you can learn from in terms of constructing a story and developing characters. If you simply like movies, this is a dramatic movie with marvelous acting and an unpredictable story. It is certainly worth your time.