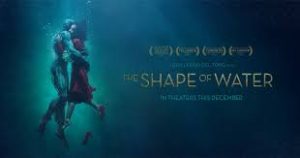 Chalk one up for the Fantasy genre. The Shape of Water joined The Lord of the Rings: The Return of the King as the only true Fantasy films to win the Oscars’ highest honor. A modern-day fairy tale, The Shape of Water actually seems like a polarizing winner, as many people liked it, but not a ton of people, other than critics, loved it. This may speak to the quality of the films nominated this year, and there will be more on that in a bit, but it seemed, anecdotally anyway, that there was not a huge consensus on what 2017’s best picture was. Many people loved Lady Bird. There was a lot of sentiment for Get Out, and Three Billboards Outside Ebbing, Missouri and The Post were clearly the kind of Oscar bait that usually get rewarded for being such. However, as the season rolled on, it was clear that momentum was on the side of The Shape of Water, and that momentum was confirmed on Oscar night.

I will start out by saying that I am a casual fan of Guillermo del Toro. I loved Pan’s Labyrinth. I liked Hellboy. I thought Pacific Rim was a fun, though insanely flawed film. I went in to The Shape of Water with high, though somewhat tempered hopes. I had heard a bit about the subject matter, so I knew that I had to go in with that willing suspension of disbelief that doesn’t fit very well in today’s cynical world. I came out the other side appreciating what it tried to do, understanding that this was a fairy tale and needed to be considered as such when evaluating it, and still feeling underwhelmed. 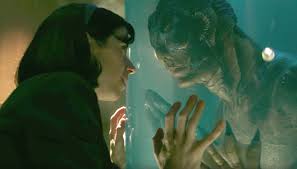 Even though the tones of the two films are completely different, I think del Toro’s Pan’s Labyrinth comes closest in style to what The Shape of Water is and what it’s trying to attempt. Even though Pan’s Labyrinth is a much darker story, they both have an element of whimsy that is quite often missing from films like this. Both films use Doug Jones in monster costumes, both films use haunting narration to set up their respective scenarios and both films use muted color palettes that make them almost feel like black and white movies. And there were many motifs throughout The Shape of Water that were reminiscent of Pan’s Labyrinth from the monsters, both literal and figurative, to the bloody wounding of men’s cheeks, it would be clear to even the novice film goer that these films were directed by the same person.

Where Pan’s Labyrinth was more successful from a storytelling standpoint was in creating emotion. For as dark as Pan’s Labyrinth is, you have an emotional attachment for everyone in that film, and del Toro was fearless in the places he would go in order to get extreme emotional reactions from the audience. It’s possible to make emotional connections with the characters in The Shape of Water, but they’re not nearly as intense as they are in Pan’s Labyrinth. That is where my own issues start with this film. I like all the characters I’m supposed to like, and I dislike the characters I’m supposed to dislike, but I don’t necessarily care about any of them. 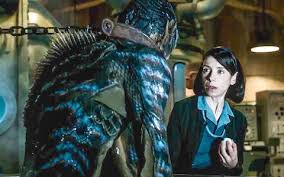 Elisa (Sally Hawkins) is the heroine of this film, and she is everything that you would want in a main character. She is precocious and proactive. She has weaknesses and flaws that she has to overcome, but she also uses to her advantage. She is a character with depth, and she’s likable. But she’s a little strange, and call it what you will, but that quirkiness makes it difficult to relate to her. Ofelia from Pan’s Labyrinth had many of the same qualities and quirks, and she was living through extremely difficult circumstances that few people alive today could relate to, but something made her much more relatable as a character. It could be that she was a young girl, and such whimsy is more acceptable from a child rather than from a grown woman, and the whimsical nature of her adventure stood in sharp contrast to the dangerous and depressing world in which she was living. Elisa is a part of her world, but because she’s mute, she’s been to this point in her life more of an observer than a participant. Attempting to rescue this creature with which she’s formed this bond not only allows her to feel like a participant for the first time, but it also has allowed her to make a real emotional connection with another sentient being, the type of which she’s never had with any human being. That, I believe, is the underlying point and theme of this film. It’s about love, and it’s about being an active participant in your world. 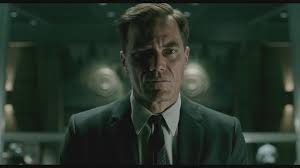 On the flip side of this coin, we have the antagonist, Richard Strickland (Michael Shannon), a bigoted government agent who is responsible for the capture of Amphibian Man, and wants to turn him over to the military. Del Toro and co-screenwriter Vanessa Taylor did a terrific job of giving Strickland depth by giving him the appearance of being a family man, although for the most part he neglects his kids and mistreats his wife. He is the clear monster in this monster movie, and he shows us that sometimes monsters can wear suits. This is again a similar motif to Pan’s Labyrinth. The monster in that movie wore a uniform in the person of Ofelia’s step father, Captain Vidal, the sadistic soldier of Franco’s Fascist army, who abuses Ofelia and her mother and is more concerned about leaving a macho legacy for his unborn son than he is showing love to any living person in this story. Both of these villains are effective monsters, but Vidal has a lot more menace than Strickland, who is an effective villain, but del Toro wasn’t able to give him the same cold-blooded ruthlessness of Vidal, and that lessens this story. 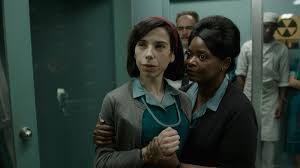 I think that’s where the difference comes in between these two pictures, and why The Shape of Water didn’t resonate with people as much as it could have. We never feel like Elisa is in danger until the very end of the story. She’s always one step ahead of Strickland, and we’re never worried that Strickland will catch on. And even if he does, he’ll take away Amphibian Man, but it doesn’t feel like Elisa is in danger of anything bad happening to her. Contrarily, in Pan’s Labyrinth, Ofelia is constantly in danger. Whether it’s from Vidal or the various challenges that Fauno presents to her, we’re constantly on the edge with Ofelia, and that suspense heightens the emotional connection that we have with the character. Since we never really reach that height with Elisa, we never make the connection, and thus, don’t enjoy the movie as much. 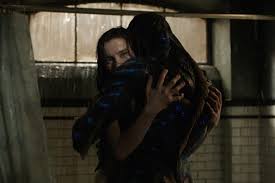 I think that the other problem is that most people just can’t get past the fact that Elisa has sex with a sea monster. From a mythic standpoint, this isn’t a new thing. Mythology from all cultures are littered with stories of humans having sex with gods, with animals, or any other manner of being. The fact that Elisa probably comes from the water herself isn’t enough to bridge the gap for today’s average movie goer. There’s an interesting line in the film when Giles (Richard Jenkins) is talking to Amphibian Man, and he wonders if he was born too early or too late. The ironic thing is that this film suffers from the same conundrum. Even though it won Best Picture, it’s not a film of this time. It’s either a film of an earlier time when we weren’t so cynical or it’s a film of a later time when we’re more open minded to different kinds of thematic exploration. This is a film that is both too early and too late for its time. 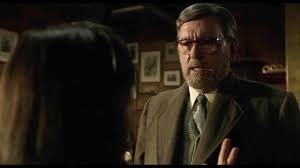 Is The Shape of Water a bad film? Not in the least. In fact, there is much about it that is enjoyable. Octavia Spencer, playing Zelda Fuller, Elisa’s best friend and archetypal mentor, brings her typical wry wit that adds an element of humor that is atypical for a del Toro film. In fact, all of the performances were terrific, and Spencer (Actress in a Supporting Role), Jenkins (Actor in a Supporting Role) and Hawkins (Actress in a Leading Role) were all nominated for Oscars for their respective performances. This is also a beautiful film to look at, as its Oscar win for Best Production Design demonstrates. So while this isn’t your typical Best Picture winner, it’s not a crime that it took home the statue.

No, they did not. While it might not be a crime that it won, it still wasn’t the correct decision. Get Out was a game-changing type of film that had a cultural impact that far exceeded any of the other nominees, and really should have been named Best Picture. Three Billboards Outside Ebbing, Missouri was also a better and more emotionally engaging film than The Shape of Water. Lady Bird was another film that struck a chord with a lot of people for its candid views of the relationships between mothers and daughters, as well as its coming of age motifs. Phantom Thread was another haunting film that left some people scratching their heads with its somewhat ambiguous ending. Christopher Nolan’s Dunkirk put us on the beach and in the middle of the seminal battle that, even though it ended in allied retreat, saved the British military to fight another day, and it was riveting and suspenseful to watch. On the flip side of that was The Darkest Hour, a film about Winston Churchill, and the political side to Dunkirk, and how Churchill risked everything in encouraging going to war because he knew that appeasement with the Nazis would be a failed policy. Any one of those films could have made a compelling case for Best Picture. The only one that I leave out was Call Me by You Name, which, while beautiful to look at, was an undramatic look at a teenager coming to grips with his sexuality and falling for a man in his twenties who ends up taking advantage of him. It was a bit too nuanced for me, and not up to the standards of the other nominated films. The rest of the films were that close to each other. There was no clear cut favorite. To be honest, my two favorite films of the year weren’t even nominated, but I could make a strong case that either Baby Driver or I, Tanya was really the best film of the year.

Here’s the thing. If you haven’t seen The Shape of Water already, and you take advantage of an opportunity to see it, do this: go into it with the understanding that you’re going to be watching a modern-day fairy tale. This film requires an abnormally large willing suspension of disbelief and a wide open mind for any possibility in order to fully enjoy the subtleties of this magical story. It really is a wonderful film in its own way. Should it have been named Best Picture? Probably not. Is it worth two hours of your life to sit and watch it? Probably yes.