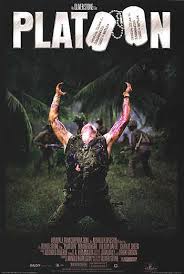 If 1984’s Amadeus was the best film of the 80’s, then 1986’s Platoon was certainly the most intense. I would seriously have to consider ranking Platoon as the #2 film of the decade, or at worst the #3 film behind Amadeus and Raging Bull. Platoon is a powerful film that demands to be noticed, but is so expertly crafted that it’s easy to forget how well-made a film it is due to the hype and notoriety that surrounds it and it’s writer/director Oliver Stone.

Oliver Stone was already a known commodity in Hollywood by the mid-80’s having written the screenplays for such successful films as Midnight Express, Conan the Barbarian and Scarface. He had already directed a couple of features as well, but Platoon, a film based on Stone’s own experiences as a soldier in Vietnam, launched him immediately to the top of Hollywood’s upper echelon of film makers and he would also spend the next decade and a half as one of the more polarizing figures in the entertainment industry. Stone was a film maker who had a definite political point of view, and his films that would follow Platoon, most notably, Wall Street, Born on the Fourth of July, JFK, Natural Born Killers, and Nixon demonstrated that he had a progressive, if not slightly paranoid vision of our society and the world in general. That he was so comfortable and confident in putting out what, at the time, were somewhat controversial points of view, helped to make Stone such a polarizing figure. With all of that being said, and his politics notwithstanding, Oliver Stone is an exceptional film maker and Platoon demonstrated his skills very effectively.

I would also like to point out that Stone at least deconstructed his own paranoid image with a cameo in the film Dave where he’s being interviewed by Larry King and he’s the only one who suspects that a conspiracy is afoot and that Dave is not the real president. Here is a link to that clip.

Let’s get back to Platoon. This is an extraordinary film on several levels, as it has incredible characters, a compelling story and was shot in such a way as to heighten the drama and the tension to nearly unbearable levels. I was actually discussing with a friend of mine how expertly Stone was able to create scenarios in which nothing seemed to be happening and yet the tension would ratchet up with each cut and with each passing moment. There is a scene where they are out on patrol and they come across a network of bunkers. By this time we’ve met everyone in the platoon and we feel like we know each of them pretty well (more on that in a bit). A couple of the men search inside the bunkers, while others look around the outside and others still patrol the perimeter. There’s a little bit of dialogue and no music. The only sound is the ambient sound from the environment and the sparse dialogue the characters speak. But the tension is palpable. Stone does an amazing job of setting up the scene so that it’s possible the North Vietnamese troops could be close by. As the main character, Chris (Charlie Sheen) patrols ahead with Manny, we are just waiting for something bad to happen. This goes on for what seems like an eternity. For several minutes we watch knowing that the longer they stay in this position, the more likely it is that something bad is going to happen to them.

Sure enough, something bad does happen, but not what we’re expecting, which makes the scene so effective. The two troops looking through maps and other articles left behind had initially been very careful to look for booby traps. Finding none, they continue their search. Thinking they’ve found a trove of maps and other valuable information, one of them picks up the box and it explodes, blowing off both of his arms. Still no music, and only ambient sound and the acting of the character as he numbly stumbles out, falls and dies. Chris comes back to the platoon, but no one can find Manny. Eventually they do find him, and he’s been killed by the VC and strung up on a pole. This causes much anger among the surviving members of the platoon, especially Sgt. Barnes (Tom Berenger), who takes his frustrations out on the local residents of a village they’ve been dispatched to in order to find weapons and Vietcong sympathizers. While interrogating the village elder, he shoots the elder’s wife for no other reason than she was an annoyance and then threatens to kill the man’s daughter if he doesn’t talk.

This is where the film starts to make the viewer angry, and is another example of how Stone is such an effective film maker. He elicits emotions out of the audience, and not all of those emotions are comfortable. The scene in the village is a perfect example of that. In this scene we have American soldiers, the same soldiers that we were so concerned about just moments before, and they’re terribly mistreating these villagers. It’s a high-tension scene and characters that we’ve generally liked and rooted for are acting in a way that we’re ashamed of. You almost want to shout at the screen for them to stop and to get a hold of themselves and stop acting like animals. Finally Sgt. Elias (Willem Dafoe) shows up to bring some sort of sanity back to the situation. Then, after acting like a deranged lunatic himself for a moment, comes to his senses and stops some of the other platoon members from raping a couple of the young girls from the village. That bit of sanity in a completely insane moment allows us to empathize with Chris and with Elias and shows us that these are clearly the men we’re going to be rooting for over the rest of the film.

That leads me to the characters. Stone did a great job of introducing us to the characters in the platoon and the different factions within it, led by the respective sergeants. Sgt. Elias leads the side of the platoon who are more light-hearted and rebellious. They smoke weed and listen to psychedelic music when they’re on leave and take a more nuanced look at life. They also are primarily African Americans and Hispanics. The other side of the platoon is led by Sgt. Barnes, and they’re mostly white, primarily Southern and are heavy drinkers of beer and Jack Daniels. They don’t smoke weed and there is an arrogance about them that can certainly help them survive but also gives them a moral relativism that allows them to commit atrocities that you wouldn’t imagine doing under normal circumstances. The one thing they all have in common is that they’re all poor or come from poor backgrounds, other than Chris, who dropped out of college to volunteer for the army because he didn’t think that it was right that only the poor and disadvantaged were being sent off to fight.

We’re initially introduced to the platoon when Chris is sent out on his first ambush with them, and none of them come across as sympathetic to him or to us. Chris is being initiated right away into this special world and if he can’t handle the initiation he has no chance to survive. A little later on, Chris befriends King, who introduces him to the members of Elias’ faction, and he fits right in with them. After being introduced to Elias team and their pot smoking and rick music, we are introduced to Barnes’ team and their heavy drinking, their country music and more by-the-book military style.

One thing that I found very interesting, and Chris mentions this in his narration when he says, “we were fighting ourselves”, is that this division amongst the members of the platoon is symbolic of the divisions the nation was experiencing at the time. It reminded me a little of a scene from Titanic, which we’ll get to in a couple of months, where we see the people in steerage who dance and sing and live life to its fullest even through they’re poor juxtaposed to the upper class who sit quietly and dignified while the smoke their cigars and discuss world events in a setting that couldn’t be more boring. The differences in Platoon aren’t as stark, but are still there and still noticeable. It sets the stage for the inevitable conflict to come, and helps build the drama of the story.

One of the reasons I tend to prefer Amadeus to Platoon is that the former has a lot more subtext. It’s a much more thoughtful film that uses more film making motifs to create a more complete experience. Platoon, while not necessarily on the nose, is much more straight forward. While Amadeus is a thinking person’s film, Platoon does make you think, but in a different way. Platoon forces you to confront our nation and our way of life in a manner that makes you question its supposed superiority. Platoon forces you to ask if we really are the great nation that we’ve always been told we are, and it does it in a straight forward and brutal fashion that leaves no room for nuance. Platoon is a film that you have to think about in order to attain its full affect, but it forces a different, more internally targeted type of thinking. Again, that’s the duality of Oliver Stone. He is a terrific film maker, and one of the things that makes him so terrific is that he forces you to rethink your preconceived notions, and that isn’t always comfortable for people. So the very thing that makes him a great film maker also makes him controversial and turns some people off to him.

One other quick thing I’d like to point out is the number of men in this film who would go on to have solid to stellar careers in Hollywood. Go to IMDB to look up any of these names, and you’ll find some very successful careers: Charlie Sheen, Tom Berenger, Willem Dafoe, Keith David, Forest Whitaker, Kevin Dillon, John C. McGinley, Mark Moses, Johnny Depp. Most of these guys had had some success in Hollywood already, but this film helped to launch many of their careers to the next level.

Finally, I would like to say this. I had not seen Platoon since I saw it in the theater the year it came out. I was so affected by it from an emotional standpoint that I couldn’t bear to put myself through it again until now. If you are like me and haven’t seen Platoon for a long time or if you’ve never seen it, it’s worth watching. IT is a powerful film and an important film, and it deserves to be seen and thought about.

Yes they did. There were some other good films nominated in 1986. Hannah and Her Sisters is considered by some people to be Woody Allen’s best film, but fortunately the Academy didn’t repeat the same mistake it did nine years earlier when Annie Hall beat Star Wars, because Hannah and Her Sisters isn’t close to being on the same level as Platoon. The Mission is another powerful film that forces us to look at our past and how many of our forefathers left behind a legacy that deserves another look. A Room With a View and Children of a Lesser God were both romantic dramas that were fine films, but were also not on the same level as Platoon, which I should add is also ranked 83rd on AFI’s original list of the 100 greatest films of all time. It was one of the top two or three films of the entire decade and the only real choice for Best Picture of 1986.